Surgeons Show The Lungs Of A Smoker Who Died At 52 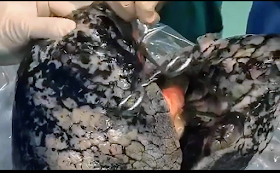 Surgeons at Wuxi People's Hospital, Jiangsu, China performed the surgery of a man who died of multiple lung diseases.

A man who has been addicted to smoking for 30 years was operated upon and what surgeons saw shocked them. Instead of the man's lungs being pink in color like the a healthy lung, his was charcoal black.

The patient gave the order for his lungs to be donated after his death but the doctors soon discovered that this lungs were of no use after the surgery.

The hospital uploaded the video of the surgery which has 25million views and a caption that followed the video which says "Do you still have the courage to smoke?".

After seeing this picture, I join the hospital to ask, "Do you still have the courage to smoke?"

Be Inspired To Look And Feel Healthy.

Thank You For Reading This Post. I Hope You Were Inspired? Please Share Your Thoughts With Me By Commenting. I Love To Hear From You.